Unfortunately, as expected on a ship, there is always a time when you have to say goodbye to one of your colleagues. As much as you want them to stay, their contract ends and they actually want to go home.

Kidnap you say? Tie them up and throw their passport overboard? Change their flight details and extend their contract against their will? Maybe isolate them on the day they have to leave?

Despite sailing in international waters these actions are still illegal.

Instead we decided to hold a double leaving and birthday party for Dave.

My cabin was chosen and a cake was found. Well actually he managed to end up with 3 cakes each one getting progressively bigger by the time his birthday was over… 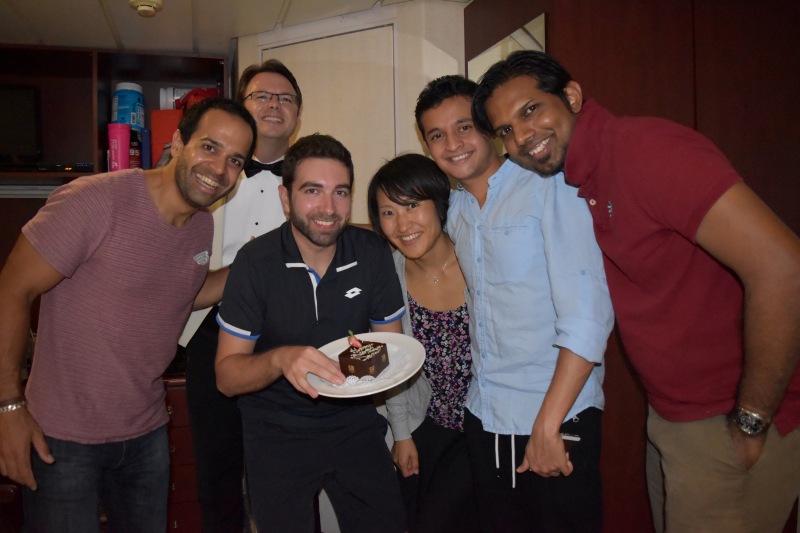 So… What do you do with a card trick that your dad showed you approximately 20 years ago after he came back from work one day? The one where you turn al the cards upside down and get people to point to cards that you tell them. Then show them how they all picked the correct ones?

Well… I’ve shown several people in the last few years… but it only took Dave a couple of goes to figure it out. We ended up creating a bit of a double act with the trick, changing it round slightly anytime we felt someone was getting close to getting it. Shifting the trick from me to him then back again. It started getting quite complex by the end, and although neither of us are actual magicians, we managed to get anyone we showed the trick to get quite the shock!

Cheers dad for showing me this trick… it has created many hours of fun over the last few years, and especially the last few weeks!

“My passion for travel, writing, backpacking, and photography starts here.”

Come explore the world with me!